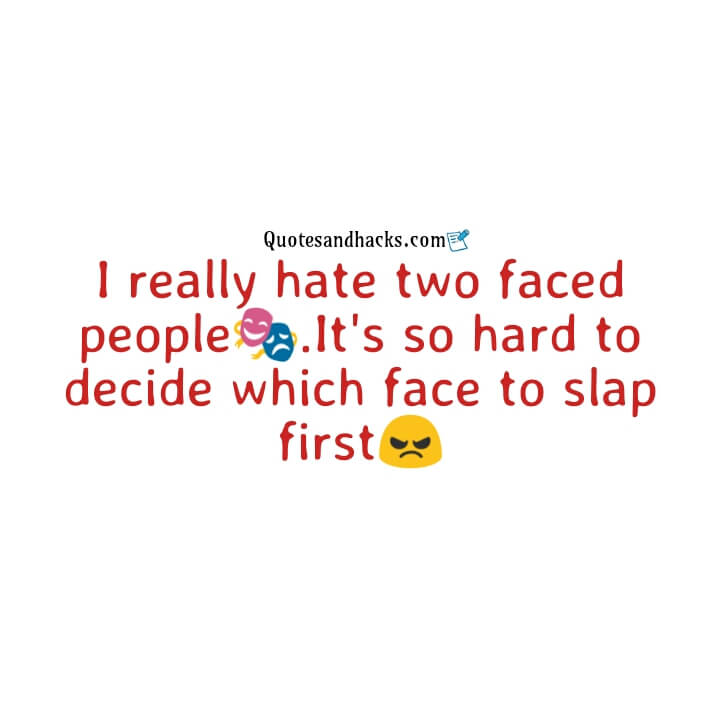 Better to have an enemy who slaps you in the face than a friend who stabs you in the back.

Here is a list of 34 Best fake friends quotes.

1)Sometimes it’s not the people who change,It’s the mask that falls off.

3)Lucky are those who find a true loyal friend in this fake world.

4)I distance myself from people for a reason.

6)Some people were only friends with you because you saw them five times a week.

7)Do you ever feel you’re not even friends with your friends?

8)The realest people don’t have a lot of friends.

9)I really hate two faced people.It’s so hard to decide which face to slap first.

10)It’s Funny how friend’s forget us when they don’t need any more favors.

11)Fake people always act that they are helping you but in reality, they never want to help you.

12)I’d rather have an enemy who admits they hate me,instead of a friend who secretly puts me down.

14)Be careful my friends, Peoples are were masks of a lie so they look attractive and supportive.

15)The saddest thing about betrayal is that it never comes from your enemies.

16)A friend who stands with you in times of pressure is more valuable than a hundred friends who will stand with you at times of pleasure.

17)I may not be perfect but at last i am not fake.

18)Sometimes,Your biggest enemy hides behind a disguise of friendship.

19)Fake friends show their true colors when they don’t need you anymore.

20)Better an honest enemy than a false friend.

21)I don’t chase anyone anymore. Wanna walk out of my life,there’s the door. Hell,I’ll even hold it for you.

22)People will stab you in the back then ask you why you’re bleeding.

23)You shouldn’t be always available for someone who doesn’t even ask how you are doing.

24)We don’t lose friends, We just learn who our real ones are.

25)You must learn who is gold and who is simply gold plated.

26)Some people will only love you as much as they can use you.Their loyalty ends where the benefits stops.

26)Stop expecting loyalty from those who can’t even give you honesty.

27)Disappointed but not surprised.

28)Oh,I’m sorry.I forget i only exist to you when you need something.

29)The most dangerous creature on this earth is,a fake friend.

30)A close friend can become a close enemy.

31)An honest enemy is better than a best friend who lies.

32)Fake friends are like shadows. They follow you in the sun but leave you in the dark.

24)I dislike people who only need friends when it’s convenient for them.