50 Best Self respect quotes with images 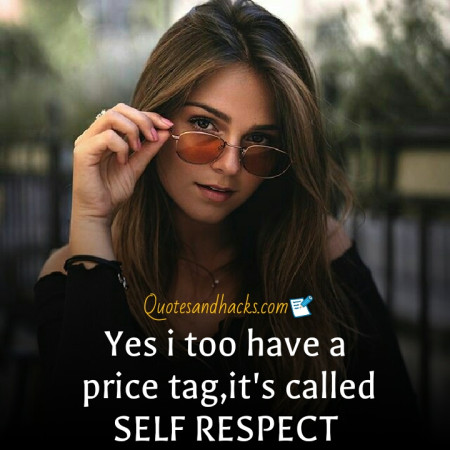 Don’t allow someone to treat you poorly just because you love them.

Don’t lower your standards for anyone because self respect is everything.

Here is a list of 50 Best Self respect quotes with images.

Self respect is the root of discipline.the sense of dignity grows with the ability to say no to oneself.

When you start seeing your worth,you’ll find it harder to stay around people who don’t.

She remembered who she was and the game changed.

When you learn your worth.you will be stop giving people discounts.

It costs #0.00 to treat someone with respect.

Your value is not determined by others.

Be selfish enough to have Self love,self worth, and Self respect.

Never bend your head.always hold it high.look the world straight in the face.

Love is not a reason to tolerate disrespect.

Be strong enough to let go and wise enough to wait for what you deserve.

Losing someone who doesn’t respect or appreciate you is actually a gain not a loss.

Never allow someone to be your priority while allowing yourself to be their option.

NO person and no relationship is worth compromising your dignity and Self respect.

I can un-love people if they mess up with my self respect.

Don’t love if it costs self respect.

Make yourself a priority once in a while.it’s not selfish, it’s necessary.

Looking good is not self importance,it’s Self respect.

Sometimes it’s not ego,it’s Self respect.

Never beg someone to be in your life.if you text,call ,visit and still get ignored walk away it’s called Self respect.

Never lose your dignity and self respect trying to make people love and appreciate you .some people ,just aren’t capable.

At this age,I’m only interested in consistency,stability, respect and loyalty.

Don’t let your loyalty become slavery.know when to let go and never compromise on Self respect.

Be careful what you tolerate,you are teaching people how to treat you.

Self respect is a priority, not an option.

Cutting people out my life does not mean i hate them.it simply means i respect me.

Respect yourself and the others will respect you.

Self respect permeates every aspect of your life.

Don’t let someone get comfortable with disrespecting you.

Give yourself enough respect to walk away from someone who doesn’t see your worth.

Respect yourself enough to walk away from anything that no longer serves you ,grows you or make you happy.

Don’t lower your standards for anyone or anything .Self respect is everything.

When people show you their red flag,show them your white flag and peace out.

Needing approval is like saying your view of me is more important than my opinion of myself .

People tend to think i will forget the shit they said.but there is no expiration date of disrespect.

The crown of Self respect adorns the beauty of a woman.

Between ego and self respect friendship founds its expiry date.

Losing your Self respect for love can no longer be called love.

Shoes and people ,if they hurt you ,they are not of your size.

Yes,i too have a price tag.it’s called self respect.

Carry yourself like Queen and you will get a king.

Sometimes you have to leave, not for ego but for Self respect.

You can’t force someone to respect you,but you can refuse to be disrespected.

Maturity is learning to walk away from the people and situation that threaten your peace of mind ,self respect, values,morals and self worth.