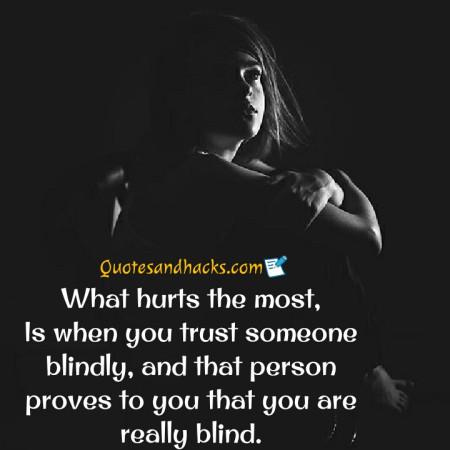 Standing alone is better than standing with people who hurt you.

Here is a list of 32 Best Deep hurting quotes.

I act like,i don’t care.but deep inside i swear it kills me.

The toughest part of letting go is realizing the other person already did.

Hurting someone can be as easy as throwing a stone in the sea.but do you have any idea how deep that stone can go?

What hurts the most,is when you trust someone blindly,and that person proves to you that you are really blind.

Silly me,expecting too much from people again.

Some people hurt by words,some by actions and some by silence.but the biggest hurt is that someone ignoring us when we value them alot.

I wish i could go back to the day i met you and just walk away. because honestly,it would’ve saved me so much hurt and pain.

I thought you were healing me but no,you broke me even more.

If you ever feel that you are no longer important to someone.then leave their life silently.

80% of woman use silence to express pain.you know she’s truly hurt when she chooses to ignore you.

Just because someone is strong enough to handle pain doesn’t mean they deserve it.

Tears have no weight.But it carries heavy feeling.

Who hurt you? My own expectations.

Sometimes being too kind is what gets you hurt.

Among all the toys in the world,people choose feelings to play with.

I’m more broken than you think.

She’s hurt mentally and emotionally.but every day she walks with a smile because that’s just who she is:The girl who never stopped smiling.

Always remember someone’s effort is a reflection on their intrest in you.

I am fading away slowly and you aren’t even noticing.

I don’t get it .you said I’m important to you but you still make me feel I’m not worth your time.

Sometimes you just have to stay silent,because no words can explain what’s going on in your mind and heart.

Some people will hurt you and then they will act like you hurt them.

Sometimes when the people you love hurt you the most.It’s better to stay quiet because,if your love wasn’t enough.do you think your words will matter?

It hurts when you realize you aren’t as important to someone as you thought you were.

Just because decision hurts,doesn’t mean that it was the wrong decision.

People will usually hurt you in attempt to heal themselves.

Just for once, i want someone to be afraid of losing me.

The worst kind of pain is getting hurt by the person you explained your pain to.

I told you what hurts me the most and you did it perfectly.

A strong woman is one who is able to smile this morning like she wasn’t crying last night.

Honestly,i feel really stupid for holding on to things that just keep on hurting me.

Sometimes giving someone a second chance is like giving them an extra bullet for their gun because they missed you the first time.