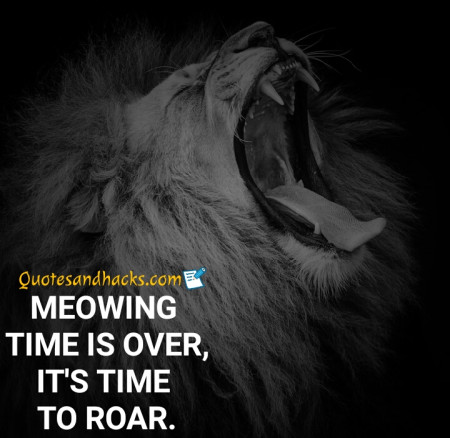 A Lion doesn’t concern himself with the opinion of a sheep.

Rule number 1,Never be a number 2.

Rule number 1,Forget what they think.

My only talent is that i just don’t quit.

How beautiful it is to stay silent when someone expects you to be enraged.

No matter how hrad it gets,stick your chest out keep your head up and handle it.

Sometimes being strong is your only option.

Do not tolerate disrespect not even from yourself.

If you kick me when I’m down you better pray i don’t get up.

Your first mistake was thinking i was weak.

Warriors are not the one who always win,but the ones that always fight.

Never announce your moves,before you make them.

Stay low key,not everyone needs to know everything about you.

Damaged people are dangerous.They know they can survive.

When you build in silence,people don’t know what to attack.

If you want to successful,you must be Willing to walk alone.

I love it when people underestimate me.

The goal isn’t to be liked,it’s to be Respected.

The comeback is always greater than the setback.

They hate me,because it is easier than beating me.

Surround yourself with a team just as hungry as you.

I will not quit until I’m living the life i dream of.

They laugh at you because they have no idea what you’re capable of.

My words will either attract a strong mind or offend a weak one.

My pain is my motivation.

Let the dogs bark,the lion is still the king.

The odds are always in my favor because i don’t quit.

You’ve survived 100÷ of your worst days so far.keep going.

A lion doesn’t lose sleep over the opinions of a sheep.

My only competitor is the person i was yesterday.

It’s better to be a lonely lion than a popular sheep.

The strongest heart have the most scars.

Give the world a reason to remember your name.

sometimes isn’t about who has more talent.it’s about who’s hungrier.

Thank you for the pain,it made me raise my game.

I thought about quitting ,but then i noticed who was watching .

I’m coming for everything they said i couldn’t have.

Be kind,be humble but be a beast.

Never take Eyes off the target.

The lion doesn’t turn around when a dog barks.